Calvary Baptist Church was organized in January, 1911, when the community was known as Faye, North Carolina. The first service was held at the Plank Road School with the Rev. W. A. Barrett officiating: Calvary’s first pastor was Rev. J. W. Hartsell. Ralph Riddle was the first to be baptized in May 1911. The first revival was held in July, 1911. When the church was organized, services were held on the last Sunday of each month.

On November 19, 1926 the first funeral was conducted for Mary Seawall Dupree. In 1948 the children of Mr. J. S. Dowdy donated one-half acre of land to the church. A new brick church was constructed in 1952. At that time, the old wooden one was tom down. On September 11, 1953, one- fourth acre of land was donated by S. C. Beal, Mr. Carol Chalflinch donated the first heating system in 1954. In the same year the church organized their first WMU and Training Union.

The first wedding conducted in the church was February 11,1956 for Helen Edwards to Jimmy Wilson. On December 2, 19% the church was honored to have the privilege to ordain its first minister from the church, Mr D. E. Frye.

The church was experiencing the highest average attendance of 144 in 1956. The late 50’s saw many additions to the church such as a new Mens’ Sunday School room in 1957 with another addition in 1959. The first carpet was installed, new pews, and pulpit furniture was also added in 1958. Our first Bible School was held in 1959.

The 50th anniversary of Calvary Baptist Church was celebrated on January 29, 1961 with many of our former pastors present

A covered cement table was built in memory of Mr. Jesse Crabtree and Mr. Arthur Moore in 1956. In 1971, a kitchen was added to the end of the table.

In 1970, a vestibule and two 9×12 rooms were added with a library. The cement walks were poured, and stained glass windows were added in 1971. A new piano and organ were bought in June,1971 A new furnace and air conditioning system was installed in 1973

In April, 1972 the church acquired land for a parsonage from Mr. J. R. Chalflinch. The parsonage was completed in 1972 with Rev. Coy Walker and family being the first to live in the new house. The church paid off the note on the parsonage and burned the note on June 10, 1979 during the Memorial Day Service

The Youth Choir was organized in 1981. In April 1984, we began construction on the fellowship hall and it was completed in July, 1985 with no outstanding bills. The Fellowship Hall includes two bathrooms, kitchen, and a prophet’s room. it was furnished by our Women Missionary Union.

January, 1986, Calvary celebrated 75 years by honoring Mrs. Gladys Brown as one of the original 12 members who organized our church.

The church paved the parking lot in 1986. Installed a new water cooler and put a new microwave in the fellowship hall in 1987. In 1988 we put in a new air conditioning system. Rev. Bennie Maness became our new pastor in 1989.

Our sanctuary was beautifully renovated in 1990. For the first time the church has a new Baptistery. In August of that year, the sanctuary was dedicated completely free of debt.

In 1991, we remodeled our restrooms, with easy access for the handicapped– We installed new tile in the fellowship hall. On December 9, 1991 our new steeple was installe 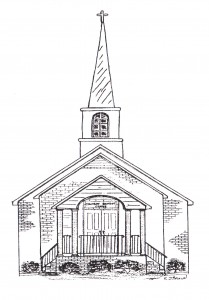 In 1992, we covered our church, put new gutters and vents and also put siding on the Fellowship Hall. In honor of Bennie Maness we placed flower stands, similar to the ones at the front of our church, in the new Associational Building. In this year we sent 69 Bibles to Russia with Rev. Tommy Smith.

As of today we have 215 names in our church record book with 90 members active, two members in rest homes, and one in the service. That leaves 122 members not active Rev. Maness has been in the ministry for 57 years, as of August 2 of this past year.